I am 3 of 7. My parents had seven children and were obviously very busy earning money to raise us to adulthood. Dad worked all his life, but was also saddled with heart disease - after he lost his most lucrative job following open heart surgery, he picked himself up and became a businessman. Still working hard all hours of the morning, afternoon and evening.

I don't know when he discovered photography, but do know I was a late teen by then. Dad purchased a camera and gear and began frequenting a local camera shop on the search for good magazines and talk about taking pictures. 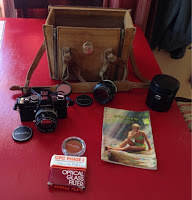 My sister was recalling a certain instance where my father insisted on taking her picture on the porch of our grandparent's home on Baraga Avenue in Marquette, Michigan, the day after his father died. She was, of course, asking him not to as she had been crying. But he told her something like - family and a record of family is very important and this picture would be part of her history.

Anyone was fair game for his picture taking and his interest grew - so he began collecting a variety of lenses to expand the depth of his photography. Family was of utmost importance to dad...a continuity through photographs, essential. Sadly, many of those he took have disappeared, some destroyed by basement floods, others went poof. 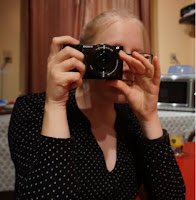 I think of all my nephews and nieces - the ones who knew dad and the ones who were born after his early death. Many of these young people have missed his strength, humor, the way he liked to get you to laugh, his walk. Rumor has it that dad spent a couple years of his early life on a boat (ship), as we were from a sailing family, and never lost his special way of walking - sauntering side to side like balancing on moving water.

I have made a decision to include my own photos in this blog. Some are okay - none professional looking - yet. You see, two of my own children are interested in photography, one earning an award for a stunning photo taken in Japan. She has promised to help me learn to take pictures and recently spent time patiently showing me what all I can do with my camera. I've been encouraged to take photography classes and am eager to begin - and hope to make dad proud.