Sunshine, On My Shoulders

This Baby Boomer is almost 65, exclamation point... Am I tipping the balance between too old to want to experience more of life's adventures "in its fullness". Am I physically capable or brave enough - or plain old tired out from my journey to this year?

When my mom was 65 I invited her to a group retreat at Grandfather Mountain in North Carolina. She bought new shoe-boots, packed “mountain” clothes (so cute), and slept in a retreat center along with other adventure-minded people of all ages. She went on extreme daily excursions with her peers, many older, and saw, experienced and embraced her week in the mountains, tubing on the New River, campfires, and, especially enjoyed the thick rich taste of Cowboy Coffee!


My friend, Kim wrote this to me a couple years ago: “It's great to think about things you'd still like to accomplish. A friend of mine decided to pick one thing and stick with it, rather than making a list, which can be overwhelming. So, at age 60, she decided to complete the entire Grand River Expedition (14 days kayaking the entire length of the river). She started training for it and met some new friends in the process. She completed the expedition, missing one day of the two-week trip because of illness. Six months later, she was diagnosed with stage-4 cancer. I'm not trying to hijack your live-today-for-tomorrow-we-may-die message, but it tells me that maybe I should focus on one goal at a time and make the most of that. Darn you -- you always get me thinking about this stuff.”

This message from Kim is encouraging, as was my mom’s optimistic zest for life, laughter and family … her spirit courses through my veins. 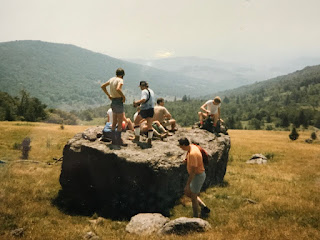 Lunch on way to the summit 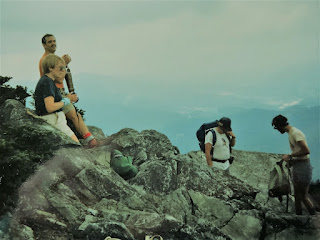 I am spending time reflecting on my younger-me "bucket list" with goals ranging from biking across Michigan to walking the Appalachian Trail (some accomplished). What would prevent me from dreaming up new and wild and crazy, along with some “tame” ideas? What would I like to add to my older-me idea list … would some scoff at this as a feeble attempt to regain my youth? What does that matter? It is my personal journey.

Last birthday I spent a solitary day walking around a rather rugged 5+ mile rocky, smooth, and hilly trail as a gift to myself. I was organizing my day as I never had. After the walk, on which I got magically lost, met up with my family and went to a lake where I learned to paddleboard. Supper was Kentucky Fried Chicken - decadent and a perfect complement to the way I wanted to celebrate my birthday. It was a lovely challenging day of following my heart, growing, and being supported by my husband and kids.

On a long-ago kayak trip with my kids and husband, my daughter found a bucket in the water. I remember the bucket, the emotions, probably over-dramatized, and the smell of the lake and wonder if this recollection is a sign to explore my wish list? Yep, mainly because I am not ready to curl up and only live in reminiscing – I want to make current memories.

Email ThisBlogThis!Share to TwitterShare to FacebookShare to Pinterest
Labels: Don't Give Up

A Day of Dust and Magic

It was a perfect day for a softball game: humid, warm, the pungent smell of dirt from the diamond. The sounds of balls clapping into mitts, orders shouted, stretching, excitedly anticipating the arrival of our opposition.


A packed crowd surrounded the field as the opposing team arrived in limousines: laughing, hand slapping us, playing to the spectators. Magic Johnson, Greg Kelser, and Jay Vincent led the contingent of Michigan State University basketball players - their celebrity vs our small stature spirit. Each one of us, men and women, were chosen for our abilities to play this exhibition softball game in Holt, Michigan.


My hand was tiny compared to these famous athletes ... the high-fives hurt, a lot, but the thrill of the game erased physical discomfort.


*This is number one, and the inning's just begun,
we need lots and lots of hits to score some runs!


I felt absolutely thrilled to be selected for this special team of MVP players around the region and "won" my favorite position -- shortstop. My life was softball, climbing trees, and walking in the woods. Playing against these men was a highlight, challenge, and a chapter-worthy notation on my life list. Along with the media attention, spectator's screaming, the clink of balls hitting aluminum bats, one memory I am proud of ... I snagged a mean and direct line drive off the bat of Magic Johnson. Out! My gloved hand seared with pain, but he was out.


Their basketball turned softball team played to their fans and massacred us in runs and over the fence hits. The opposition was full of power, athleticism, and fun. The spectators got their money-worth of laughter.


Run the bases, leave no traces, lots of hits,
lots of runs, and they scored.


We obviously lost but I was in my element and loved every minute. We experienced the thrill of the game, celebrity-ness, fame and heart wrenching choking defeat.  It was great. My hand remained painfully swollen and bruised for weeks from the catch made off Magic's line-drive (and the high-fives) but relived the thrill and feel of this particular game for years. A moment in life to carry me into the future.


Now this is number seven and they really played like heaven;
they had lots and lots of hits and scored some runs!
They ran the bases,
they left no traces,
got lots of hits, lots of runs,
and they soared. 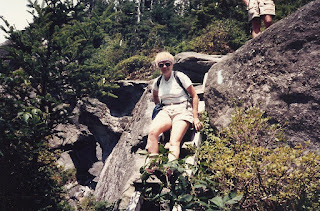 *I had been a member of the Lansing Laurel's Women’s Fast Softball Team. The Laurels were hardcore players and won games and tournaments around the country and Canada. A Laurel wrote the lyrics of the above song. As we royally lost the game against the MSU basketball team, I changed out the original words to befit the event.
- May 08, 2018 2 comments: