Is This Why Woolly Mammoths are Extinct?


Our life is a line with commas, semi-colons, question marks, asterisks, and many exclamations. I am not ready to place a period on this special line as doing so will seem as if I am giving up on growth and experiences and, of course, making memories.

This brings me to when I recently said, “yes, sure, why not” when my daughter found us a rustic cabin for a night’s stay in during this particularly difficult, windy, snowy and icy winter. There would be no electricity or running water, she tentatively warned.

The reasoning for this trip was to get closer to where she had to present a program early the next morning – when we knew the weather would change from miserable to almost dangerous. She knew I would not let her travel alone so asked me to go with her.

What do you pack for a night in a state park’s rustic cabin with no electricity, when wind gusts were predicted into the 30-50 mph range? Sleeping bags, blankets, water, lanterns, and games. My husband made me a fresh pot of coffee which he bundled up in a thermos. We were told there would be a vault toilet – excellent! But the night would be free as the camping had closed down for the season. 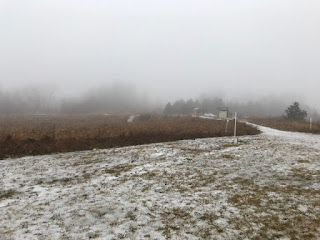 True to the weather report, we were blowing all over the place on our way to the cabin – entering the state park we still had to travel another almost two miles on icy roads to the farthest reaches. Our cabin, cozy, was situated on a higher spot along trails. We unpacked our supplies, claimed our spots to relax, and then booted up for a walk on the trail. Wind gusts were a good 35 mph at this time and the trails were icy, some impassible. As we stood on the trail we heard crunching noises and saw a golden lab come out of the snowy pathway with a man also exiting the surreal blizzard-like pathway. We chatted momentarily, his dog, Mika, licked at our hands but was eager to continue his hike with the master. That was the last contact with humanity we had! Now, we were on our own – my daughter and I – in the middle of nowhere.

The evening was interesting as the trips to “the vault” were a production of bundling, grabbing a walking stick as the wind was wickedly trying to trip us up. My daughter read me a chapter in the science fiction book she was reading, and I read her a chapter of my current book. We chattered on as the wind whistled around the cabin, shaking the roof, and making everything white. Finally, bedtime, where we lay listening to the gusts, wondering if the cabin would hold up, knowing we were high so the wind could gain speed. It was almost a relief when my alarm went off and found my gear for a walk to the vault. The gusts had grown and iced the already icy path, the vault’s door had frozen shut so had to resort to viciously pulling, banging and pulling again on the door until finally it was free – just in time.

As we quickly packed up, both thinking of the long icy road we had to traverse to get through the park, we realized that indeed, we did create a memory. A winter night in the woods. We thought of my grandparents, Emil and Edna Olsen, who, with four of their kids, lived in a cabin for a time during the winter of 1938 in Marquette. We envisioned how it was probably the beginning of February where she was losing her mind with the small cabin, concerns, the horrible winter she had to endure while my grandfather worked every day. I think it made us closer to her, but also glad for our current conveniences.

My daughter and I will put this memory on our timeline. We camped out in winter, survived, and, had a good time. 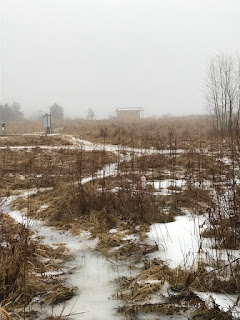 Think about your time line – what do you want on it this year? Are you eager to explore? 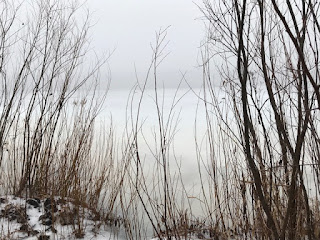