My Life in Containers

A large box was placed on the Baraga Avenue porch and became my special hiding and thinking spot. It had comfortable smooth brown sides and emitted a crispy-new wintery aroma.

Scooching deep into my box (any box) made me feel secure and peaceful. On this occasion, I was laying in it looking up into the blue sky when large, warm and smiley eyes peeked down at me. The amused and expressive eyes were attached to an elongated face which was connected to a very tall, slender, white-haired man sporting anchor tattoos on his forearms. My hidey home was discovered making it no longer a secret cubicle on a porch, but a place that captured the chuckling interest of my Norwegian grandfather, a sailor named Emil Berger Olsen. 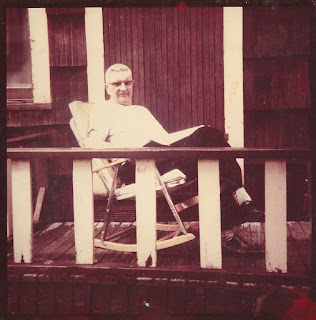 I was eight years old and spending family time with my grandparents in Marquette.  A rare large purchase provided the discarded box.

The front porch paralleled the side of the house and had a right turn porch wing which was hidden from view of the front door.  It was perfect for a small child with a fascination with containers. Perhaps because of our large family, privacy was sacred. As an adult, I believe it was my saving grace during certain times of my life. The aloneness and hidden-ness of boxes was amazing and a palpable sensation for a small quiet girl.

A musical instrument, a recorder, which I played with abandon, created sounds that reminded me of nature. I loved my recorder, and although my bent was not toward musical talents. I played pieces with the best of the best in this cardboard box.

Time has slowly drifted but not my box love - containers, drawers, cubbyholes - all make me happy. I watched a show focusing on the underworld of street people living below a large city … the lucky ones with cardboard boxes as their home. I never want to be homeless, but have to admit that this reality forced me to muse about my own life as one after another, the homeless crawled into their very own portable dwellings.

The show made me reminisce about my bemused grandfather. A quiet giant of a man.
- September 12, 2019

Email ThisBlogThis!Share to TwitterShare to FacebookShare to Pinterest
Labels: Boxes