As the holidays approach, you will find me searching through boxes of Christmas cards until I find what speaks to me from the current year. Next stop - the post office – so many new and pretty holiday stamps to purchase. Next stop is a coffee shop, and I look for a cozy one, at times with a companion, where I find the perfect seat (back to the wall, at least two chairs – one to put all my “equipment” on) and settling in to write down my thoughts to each individual friend or family member, all while sipping burning hot coffee and noshing on shortbread cookies.

One thing about me, which I almost smile to admit … I’ve saved almost every letter and card received … they are safe in a box.

As I leaf through “the memory box” of my precious correspondences, I hover over the many letters written to me from my father which he filled with humor, dry as it was, always signing off with Love Daddio. 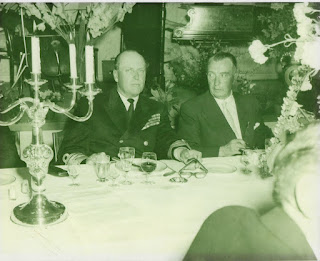 An embossed and official letter from King Olav’s secretary (Olav V was the king of Norway from 1957 until his death in January of 1991) in response to my note to him. For years, I planned to write the King to ask him if indeed he knew my Great Uncle Thorvald Olsen, who had been a mayor in Norway, and through the family storytelling, learned he was a friend to the King. Was this true? The King and Uncle Thorvald were captured in a picture sitting next to each other at a formal royal dinner in Norway. The King’s secretary wrote back to let me know that King Olav had read my letter but died before he could write back. No regrets for me except to follow my heart in sending letters when urged.

My eyes tearfully hold and read the letters sent from a family in England who took in my father after he was injured in the war (World War II). It was not unusual for families to house our soldiers for periods of time during the war and dad lived with this family during his recovery. The wife wrote to dad’s parents in Marquette informing them how his healing was coming along. The family also shared what their situation was like in England so near to the battle and horror of war.

Life at sea came alive through letters from Captain Richard E. Olsen, a great lakes ship sailor and brother to my father. His wife wrote updates on his excursions to me in lined notebook paper and always signed both their names. On one visit with him, I gave him a list of questions and a tape recorder. He agreed to answer the questions on the cassette, which I knew he felt honored – we sent these tapes back and forth and eventually transcribed them on CDs after his death and presented one to his wife. She so missed his voice and would fall asleep listening as her husband told tales of his adventures at sea. Quite the storyteller.

I eagerly leaf through a myriad of correspondence from relatives who piece together portions of our history, which would be lost and forgotten if these stories had been tossed away. I took notes and was able to write not only essays about family but self-published two books based on their writings. 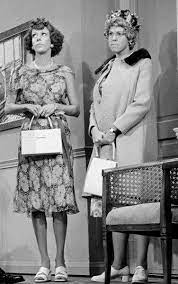 One of my favorite actresses was Carol Burnett, mainly for her humor. I had written a letter to her during a very trying period in her life and she wrote a beautiful letter of thanks back to me. I hold this dearly as an example of how, no matter how famous a person is, most love a caring note of sympathy.

Included in the box is a 3-ring notebook filled with our family newsletters. I began writing The Olsen Chronicles around 2001 and regularly solicited news from family – their trials, milestones, and plain greeting each other; edited and placed in the newsletter which I printed and mailed four times a year to each family unit. We were a large family with such great humor and stories.

At the bottom of the box is another 3-ring binder filled with all the Christmas letters received. I know they were placed with love in this book of memories.

All these written stories are a gift to our next generations. Silly? I think not.

Picture the future [you may not be living, but bear with me]. Imagine your children sitting around a table with steaming mugs of coffee or tea sharing family stories, and, of course, missing us tremendously. A pause in the conversation as they struggle to share what they learned from the stories told around the family table. The conversations run dry of memories so they pull out “the memory box” and read aloud how we struggled and laughed and loved. Through their tears they will know who they are from what we shared about ourselves.

But what if “the memory box” is empty or tossed? Nothing from the past, written, can be found. The previous generation is no longer around to pass on what experiences they had, how they solved a problem, raised their children, survived a pandemic.

Please know that your stories DO matter MORE than you can imagine.

So, with that in mind and my favorite pens sorted and ready, I write little tidbits and will grab a hot mug of coffee to drink and eagerly read your card or letter. In the new year, it will be found in “the memory box”.

(Updated with edits from 2018 posting)

Email ThisBlogThis!Share to TwitterShare to FacebookShare to Pinterest
Labels: Memories