Anatomy of a Murder

Many years ago I decided to (pedal) bike from Marquette to Big Bay, Michigan (and back again). On the chosen day there was an Upper Peninsula rain - a wet, breezy, chilly, relentless rain. I thought naively that bicycling in blue jeans would keep me warmer. True … but the material stuck to my legs, creating pull on every rotation of the pedal. I was chased by Bigfoot and a wolf causing my adrenalin to push me beyond my capacity - as my vivid imagination soared and scared me on these 27.2 miles of wilderness roads.

But, I digress. The purpose of this venture was to visit the Lumberjack Tavern where bar owner Mike Chenoweth was murdered in 1952. Big deal? The murder and court case were the basis for the 1959 film, Anatomy of a Murder, based on the book of the same name written by John Voelker (pen name Robert Traver), a native Yooper and former prosecutor for Marquette County who also loved to fish and write.

But, I digress. Our family elders shared our history over coffee, old camp tables, in warm living rooms, wherever there was an interested audience. The story goes that my grandmother loved BINGO and was quite the winner. On one occasion, in she had a particularly lucrative evening. Her winnings probably included dollar bills, soda pop, and donated items from local businesses, as was the custom in the 40s and 50s. She was so loaded down with her loot that she had to seek help - so went into the Lumberjack Tavern and asked Mike Chenoweth for a ride home. Family rumor claims he was afraid of my grandmother so acquiesced and gave her a lift. Nothing special in this story, except for the link with the main character in the book.

Anatomy of a Murder was filmed in Marquette and Big Bay featuring Lee Remick, Ben Gazzara, Duke Ellington, George C. Scott, and Jimmy Stewart. Emil and Edna Olsen, my paternal grandparents, were extras in this film, as were others in the region. A huge honor and so very exciting.

Jimmy Stewart stayed near the old courthouse on Baraga Avenue during the filming - down the street from my grandparents. Jimmy had his own way of walking and was easily recognized, was friendly in his greeting to people and always spoke in his slow signature manner. Through our grandparents we heard he was a very nice and polite man. My grandfather was a stand-in for Stewart as they matched in height and he had some of Stewart's features. 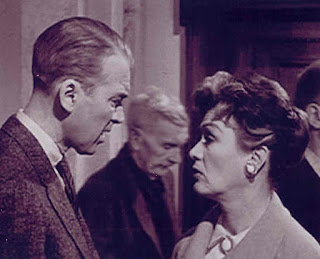 Edna Olsen wore a black netting hat during the courtroom scene and can be quickly viewed – very quickly - as she traveled past Stewart and Remick. Emil Olsen can be seen standing next to these two celebrities during a break in the courtroom action.

One final digression. My love of family history began as a young person when we would stay at my uncle's camp along Lake Superior, where outhouses were common and skunks owned the woods. As we clustered around the table waiting for the coffee grounds to boil, stories were told. As children, we kept our mouths closed, drinking in these funny tales of sailors, relatives, and each other. My life regret would be that I did not journal all these delicious pieces of history - but have been able to write these down in my favorite hard-backed journals after "interviewing" the older family members.