Panic Around My Birth

Looking up from my bassinet into the mask-covered faces of white-clothed people I saw concern blanketing their eyes as my bed was moved into a lone room where I would gurgle at the sickly green walls and single lit bulb most of the day. The door opened to crying noises as a person with a funny hat entered my solitary room holding up a long skinny shiny “toy”. She fooled me as it caused a sharp pain in my thigh making me wet myself. A masked woman with kind but worried eyes would visit me frequently. She seemed to know who I was, picked me up with her soft and gentle hands, and sat carefully in a moving chair. The lady would pull a couple of bottles from her shirt and offer them to me. Eagerly sucking away the hungry tummy pain I tasted the fear-laced nourishment while searching this kind person's eyes for an explanation.

July 18, 1953 was a day of comfortable temperatures ranging from 60-82 degrees in Marquette, Michigan, and was a day of panic in the community. A celebration of a new baby coincided with a massive polio epidemic.

("Poliomyelitis is an acute infectious disease caused by the poliovirus and characterized by fever, motor paralysis, and atrophy of skeletal muscles often with permanent disability and deformity and marked by inflammation of nerve cells in the anterior gray matter in each lateral half of the spinal cord - called also infantile paralysis." Merriam-Webster Dictionary)

"Paralytic poliomyelitis, or polio, held a reign of terror over this nation for decades. But unless you were born before 1955, polio may seem to be just another ephemeral disease that has been nonexistent for years. Those born before 1955 remember having a great fear of this horrible disease which crippled thousands of once-active and healthy persons. This disease had no cure and no identified causes, which made it all the more terrifying." (Fear of Polio in the 1950s © 1997, Beth Sokol)

Beth Sokol continues and references Jane Smith's, Patenting the Sun: Polio and the Salk Vaccine (New York: William Morrow and Co., Inc, 1990, p. 34) "When polio struck, movie theaters were shut, camps and schools were closed, drinking fountains were abandoned, draft inductions suspended, and nonessential meetings were canceled until the epidemic appeared to be over for the time being."

Over the years I grew into a tomboy who delighted in the creepy crawly, presenting my slimy treasures to mom - the kind lady with the bottles. She had an abject fear of anything wiggly and especially rodents. I often wondered if she looked back to the terror of my birth and did it cross her mind that she wanted to put me back. 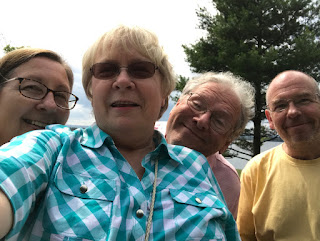 But, I am thankful our family can celebrate birthdays relatively healthy because of the sacrifices of countless people. Medical research needs to continue, funding is crucial in a plethora of diseases and conditions.

It can take over 3 years to diagnose Sjögren’s which affects mainly women. It took 10 years for my diagnosis – I had two doctors who dismissed my symptoms … but was lucky to “flare” in front of my new primary doctor who sent me to the University of Michigan Hospital where a diagnosis of this autoimmune disease was confirmed. Unlike polio, many people have never heard of Sjögren’s, which may affect over 4 million Americans.

My rheumatologist tells me that I am one of the lucky ones – so far. I’ll hold this close and be comforted in her assessment. And as everything … so it goes!
- July 28, 2017

Email ThisBlogThis!Share to TwitterShare to FacebookShare to Pinterest
Labels: Polio