Floods in our parent's basement was a regular and messy occurrence during heavy storms. The water would easily reach calf level always resulting in damage. The family cedar chest held pictures and videos which we frantically laid around the house to dry and perhaps to save. A hard back book was found in the midst of the cedar chest treasures after my father's death in 1980 ... it was a previously unknown diary written by my maternal grandmother in 1938 during a period of her life when she lived with four of her children and husband in the woods in a cabin in Marquette, Michigan. This was a winter to be remembered with the heavy snow and rain around the country throughout the year. New England was hit by a category 3 hurricane, one of the worst since 1869, on September 21, 1938, destroying the home of Katharine Hepburn. Edna Olsen wrote about her experience with the winter blizzard of 1938 - equally hard and violent - in this book.

I played with the idea of creating something lasting out of this diary: a children's book; printing out pages from the diary and sending to family; allowing it to rest and be forgotten. I kept these ideas in my heart and thoughts for many years, never forgetting.

In 2016, I was in a class led by a life coach ... my "take" from this was a decision to have focused goals for the next year - ones that would take my full attention until completion. I played with an idea of putting Edna's diary on Facebook, page by page, date corresponding to the date in the book, and to post to all my Facebook family, including "friends". My biggest concern was: would my "friends" enjoy seeing these personal posts from an era so long removed from our memories? I thought - yes, maybe.

My steps in preparation for this endeavor began at the end of 2016, and included:
Continued editing and sharpening project.The idea of creating a book out of this Facebook document occurred to me around this time. Previously, I was considering sending family the link to the Word document - but a book would give friends and family a hands-on experience and memory of Edna Olsen's diary and posts from many people. My next steps when this decision was set in
stone were: 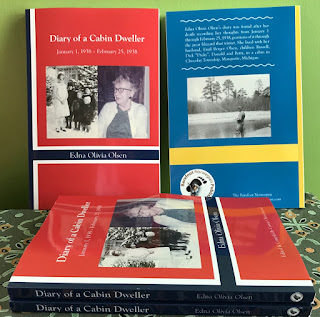 Email ThisBlogThis!Share to TwitterShare to FacebookShare to Pinterest
Labels: Social Media to Book