The cold, penetrating freeze of winters' Siberian wind whipped through the open bus door, causing our eyes to tear up and drop ice onto our laps.  We sat inside the mini-bus in , waiting for our interpreter to return:  my husband, Les, our six-year-old daughter, Addie, and our newly-adopted children, Ksenia, 11, and her brother Evgeni, age 13.  Dima, our driver, tinkered with the bus engine, yet again, with the hope it would carry us to our next destination.  Suddenly, Ksenia sprang out of her seat and jumped off the bus, engaging her entire body in a freedom dance.  I was enchanted with the beautiful smile on her very white face, which was framed by soft blond hair.  An unwelcome chill passed through me.  My new children.  Our new children.

In June of 1996, we had been given a picture of the two children as they stood by the gate at the orphanage, which captured our hearts and led us to seek adoption.  One picture of the boy, Evgeni, standing by the gates with one shoe on top of the other in a pose of sadness burned deeply in our hearts.

The memory of meeting our soon to be daughter and son in January 1997 will always be vivid, especially Ksenia's first glimpse of us walking through the heavy doors of the orphanage.  I can still hear her squealing in excited high-pitched Russian as she ran down the hall.  She announced to the staff, to the other orphans, and anyone who would listen, that her new Momma and Poppa had arrived.

Les, our daughter Addie, and I were led into the children’s home and taken to an office where the gracious director met us.  Our interpreter snapped a picture to capture the moment of the formal meeting of parents and daughter to two new children.  We wrapped our arms around our soon-to-be children in a big hug, breaking the language barrier with smiles and giggles.  They were beautiful and tiny:  One gangly red-headed boy and one very white blond girl, siblings, both standing shyly with their heads down.  We would have to wait for what seemed months for eye contact from our son.

Our future, in my rosy, naïve thoughts, was filled with happiness.  It wouldn’t be long before we could bring our children home to to live safe in our embrace.

In America, Les and I felt excited and brave anticipating this pilgrimage; we took Russian language classes and placed notecards with Cyrillic and English words describing items around the house.  But we  did not feel as emotionally strong on this foreign soil in sub-zero weather in frigid January.  The Ural Mountains separated us from Siberia, yet its winds reached deep into our coats.

We had an unreliable van, traveled roads with pits so deep they could swallow any vehicle, and were surrounded by machine gun-toting soldiers, unfamiliar foods, and were continuously stared at with suspicion.  My concern was not totally unfounded.  A month before, a couple within our agency adopted two children from the same orphanage.  On one of their treks from the children's home, without the kids, a truck careening down the icy road crashed into their van, killing the couple.

Adding to our insecurity in this foreign land, our translator encouraged, admonished us, to speak quietly in the apartment, explaining that he was frankly unsure what would happen if the neighbors discovered Americans living in the complex.  We were instructed to keep a low profile, not bringing any attention to ourselves.

Our experience with those helping with the adoption, however, was refreshing.  These Russians were exceptionally hospitable and caring, both for our welfare and the comfort of our six-year-old.  Older women on the streets would stop, turn around, and lecture us in Russian, saying that our little one was “too cold.”  Sometimes they were even bold enough to kneel and wrap more clothing around our child.  This endearing act was strangely comforting at a time when I felt so vulnerable, especially with our young daughter in tow.


We traveled daily in the rickety bus to the orphanage in the high mountains.  Then, back to the agencies where passports and visas were processed and to the Embassy to complete reams of paperwork.  The old green bus required constant care and repair by the driver.  The roads were slick with ice, and the deep potholes tossed us back and forth in our seats.  The bus slid this way and that as it climbed the tall hills of the countryside along the , where the children lived, into the distant forests west of the .

My daydreaming was broken by Ksenia’s exuberant, free-form, almost defiant, dance outside our bus in a busy section of   She threw her arms up to the sky, and raised her face to the bright sun with a smile so wide that my breath caught in my throat.  I sat there silently, filled with unpleasant thoughts bordering on regret.  Our new fledging circled the bus, as though oblivious to us, yet appearing to dare anyone to interfere with her dance by her sharp, flowing movements.  She appeared to be on the adventure of her life, and of ours together.  Yet, all I felt was a strange sensation of fear. 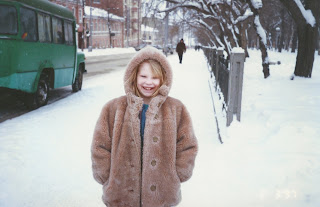 What have we done?  This girl child was already testing boundaries, and neither our interpreter nor Evgeni, our shy new teenager, had the ability to tame her and force her to return to the safe confines of the vehicle.  I could almost see her running down the street full of her new-found freedom, away from the orphanage where she had spent her adolescence, away from us.  I was frightened. Les and I cuddled our six-year-old daughter to keep her warm as we watched Ksenia dance and laugh, tempt and pull away, over and over and over again as she continued circling the bus.  Her normally white face was now red with cold.

On the street corner, several Russian soldiers stood by silently, each holding a machine gun.  With what appeared to be steel-cold eyes, they watched our Ksenia in her dance of life.  What would it feel like if one of the soldiers entered our vehicle and shot us just for being there?  Would it hurt worse to die in a country where many of the people seem to despise us for being Americans?  How would our family react when they got the news of our violent deaths?  Our new daughter and new son are Russian, had been raised by Russian parents and Russian orphanage staff.  I prayed, silently, hoping they were not taught to hate us.

All these thoughts made my heart beat faster while I watched my prancing new daughter’s continued spinning on the cobbled and icy street.  She smiled exuberantly at us, while her brother sat oblivious to her antics, playing with a car we gave him at the orphanage.  Yet, fear had its hold on me.  We even stumble to pronounce her name correctly, I thought.  She giggles when we try, and coyly repeats it for us for us to struggle with again.  Yet, she is now our child.  The brusque but fair female judge granted us the adoption.  Her gavel unhesitatingly trumpeted her decision.  Our children are so unaware of what challenges and homesickness they will face in the land of freedom.  Their grief, real pain, an intense fear of being abandoned, yet again, could be acute.

Suddenly, a positive thought surfaced.  Maybe, just maybe, Ksenia was dancing because she was happy – truly happy. Life had been difficult – at times horrendous – for these two children. At bedtime they would cry and hold their tears up to Heaven with the hope that a family would adopt them someday.  They both seem to recognize the fact that that they were probably too old to be wanted by anyone.  How would it feel to be so totally alone in the world?

Then again, maybe Ksenia was a wild child, a child of the streets with no care for boundaries.  Maybe she was a survivor, abandoned once, and at the ready to discard us starting with the dance of rebellion.  Will she terrorize us in , I wondered?  What if they try to harm us in retaliation for what they have been through in their short lives?  But we signed the legal papers agreeing to the adoption.  No turning back.  My thoughts were gloomy.  I silently whispered:  What have we done?  This girl-child cannot be controlled, she seems so unmanageable.

My frenzied ruminations were broken as the bus engine angrily sputtered to life in the frigid air.  My apprehension diminished and my fears softened to love as our new and precious daughter returned to the bus.  Her rosy cheeks literally glowed – a contrast to her chalky white skin.  She shared an angelic and happy smile, melting my hesitant heart.

Our dancing child snuggled up against Les, Addie and me, laying her little head on our shoulders.  As she took my hand in her cold and tiny one, my fears dissolved and my own tears fell with a prayer of gratitude.  I kissed the top of her beautiful blond head.  I love you (Я тебя люблю), I said, mispronouncing her sweet name.  And she giggled.

Email ThisBlogThis!Share to TwitterShare to FacebookShare to Pinterest
Labels: Adoption