"Did he ever find me in a temper! Dam’s & darn’s flying high wide & handsome. When I got thru he informed me he was a Baptist minister. Why isn’t there a hole handy to crawl into at such an embarrassing moment. Not only that I had actually smoked a cigarette while talking to him. Oh me – oh my, I haven’t got over it yet & never will. Oh well, such is life out in the sticks – when everything goes haywire!" 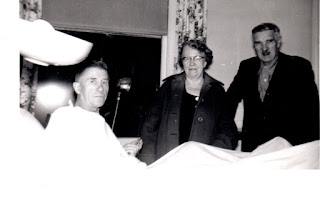 (me – can you imagine! I heard about this incident at some point in my life; and remember it. Ever been embarrassed? What was your most embarrassing moment?  Picture of Edna and Emil visiting the hospital room of one of their best friends, Alphonse -  an old farmer who helped the family tremendously over the years.)

"Was all rheumatic after my set-to with the washtubs. I guess I’m getting old. I’m sure that I’ll be the topic of Axel Anderson’s Sunday sermon. Do I even feel small over my exhibition of temper of yesterday. Anyhow the chicken was good I had yesterday & so was the bread. Butchered today - $2.70 to kill pigs 124# 150#." 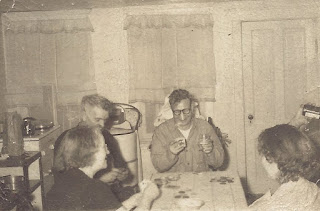 (me - it was not all seriousness and trials .. the family did play games and laughed a lot. I can imagine how grandma felt being in church that Sunday when the pastor delivered his message. Betcha she was waiting for her name to come up attached to the word, "sinner".)

"Went in today with Emil. Pay was in & paid 72.00 in to the bank – that is it was my intention but two late for the bank so I’ll hold it til next week. Cup up half of the pig today. Will bring Bill a shoulder tomorrow. I know she wants a ham – but she isn’t getting it."

(me - I have to agree with grandma in that she won't give a ham to Bill...needs to keep some of the good meat for her 5-person household. Picture of Edna holding son, Dick, Betty is on the right, Donald is on the far left, Russell between the two kids. Donald Olsen, my father, as a young man. Aunt Betty holding son, Blair.
Question to reflect on - have you ever given away something "big" out of generosity and then had great regrets?) 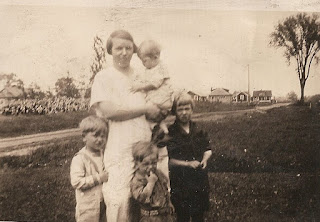 "All I did today was tidy up a bit & sit & growl all day. Under my breath - Boy is this night shift getting in my hair - in fact it's getting in all of our hairs!! Hope we are moved in to town before next night shift."

(me - we all grumble at some point. I think having the schedule of Emil working midnights and sleeping during the day was a breaking point for them. Tiptoeing around in the mornings, especially with three children, would do it for me. What makes you growl and grumble? Picture - Donald Olsen, who was 17 that winter of 1938, sporting a beard. One of the kids playing in the snow in Marquette; grandma Edna with a slew of kids.) 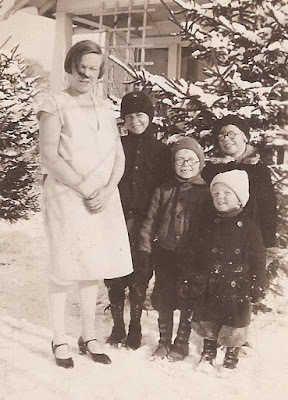