A treasure was discovered in this 1938 diary from my grandmother, Edna Olivia Olsen. Written during a difficult winter beset with one of the worst blizzards in UP history, illness, and trials - she shares her daily diary entries with us as she is living in a cabin in the woods .. in Marquette, Michigan.

"Dicky was quite sick today. Was up practically all nite. Couldn’t sleep & then the squirt started throwing up – sleeping in my good bed with me. Had an hour to sleep to be exact between 5 & 6."

(me – the family is aware that Edna and Emil lost their son, Clayton, to diphtheria and having any of their other children sick, must have been scary. Picture is of brothers, Richard and Donald Olsen at the 2nd marriage for Dick – first wife, Fran, had died. Dick is a captain for the great lakes in this picture. One of the family outside on a mattress playing with their child, almost looks like outside of a building on the island in Marquette. My father, Donald, fishing - he was in love of this sport.)

"Slept from 10 til 2 today & do I feel better. Russel isn’t feeling so hot today so I’m keeping him home from school today too. Emil is on this crazy night shift & the tip toeing & whispering is getting me down. If it keeps on I guess I’ll ring Newberry & have them reserve a room for yours truly." 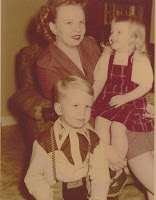 (me – a lot going on here: a possible move, illness in the family, high snow drifts, isolation, and, living in a small cabin with her husband sleeping during the day.  Pictures: Betty Turrell with children Blair and Donna – Betty lived in cabin during diary. Edna and Emil’s youngest two, Eric and Jan Olsen – both born after the diary was written. Jan Olsen Summersett jumping rope at our Olsen family reunion on Presque Island in 2014.  What is something that intrudes on our day and freedom?) 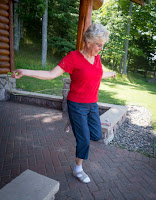 "Can’t get in a lick of washing on account of Emil sleeping. Guess I’ll get ready & go in to Bill’s tomorrow & help her with her ironing & ask if I can take my washing in Thursday."

(me - I think having grandpa sleeping during the day in their small cabin has intruded on her writing as this is a very short post compared to her previous entries. Picture is of my mother, Alfreda Fredrickson Olsen with Mimi and Gretchen Lambert, Marquette 1944. Donald Olsen, 1940. My brother, Stephen Olsen at camp, 1964-66.)

"Went in with Emil today – did all of Bill’s ironing (she wasn’t feeling so good) in return for which I will take the bulk of my wash in tomorrow with all my rugs & do them. Emil called for me at 12:20. On the way home I was so sick I was almost out. Hope I feel better tomorrow as I’ve got a peach of a washing to do." 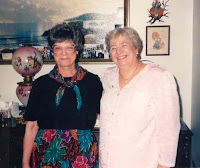 (me – I almost feel lazy compared to my grandparents! What a time to have lived – joy and heartache and tons of work. Grandma wrote people and places she had business with in her diary, and some may no longer be up there but interesting to hear these names and remember: Farrell’s, Kiltinen, Co-op, Gately, Montgomery Ward, Gamble, Queen City Garage, Coal Consolidated, Drs. McCann, Johnson, Hambajen. Does anyone know where Queen City was? We had our family 5K race in August 2016 along Lake Superior and Queen City Running on Baraga near Front set it up for us.  Is this one and the same?  Picture of best friends – Alfreda Olsen and Peggy Malmgren at Jan and Frank Summersetts. So much love and laughter and stories there.)

"Emil tells me I moaned & groaned all nite. Got the kids off to school & went back to bed til 11 o’clock, then got up & got ready to go in with Emil to do my washing. Grandma was at Bill’s & I nearly passed out. Everything went beautifully though – Emil very politely, well well ma – hello there, but he hurried right out, he had to see a man about a dog!" 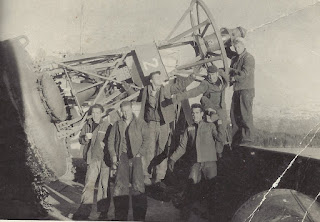 (me - I know the family had a variety of dogs and wonder if they were getting ready to move, so time for a new dog? Picture of Eric Olsen, youngest son of Edna and Emil, with his Coast Guard "mates" setting up a buoy. Emil Berger Olsen, dressed up and looking pleasantly at the camera.)

(Me - Today we say farewell to Edna Olivia Olsen - 4/12/1899-10/27/1975 - and her family as this is the end of the recorded diary for 1938 – pages are missing so it is our loss to see what happened with the family. But we are richer for her sharing life in the cabin in the woods of Marquette during this tremendously wintery 1938. Her humor, frustrations, concerns and care for others was evident. Those who knew grandma were treated to her character, spirit and strength. We share memories of her and grandpa, fondly, but with a mix of amazement that they were ours!  Edna and Emil went on to have two other children, Eric Randolf Peter and Janice “Jan” Catherine Olsen (Summersett).  We are blessed to have Aunt Jan and Uncle Frank to share our lives with now! Eric died on the Ides of March 2015. David Olsen wrote: "Emil Olsen and Edna Olsen sailed on the Great Lakes. He worked at the Piqua - a factory in Marquette that made wooden products, like bowling pins - and at Cliffs Dow, a hardwood charcoal/chemical plant, also in Marquette.  He was the janitor there and was fired for participating in a strike - later rehired, retiring around 1958. They also worked at the Grand Hotel on Mackinac Island and were both extras in the Jimmy Stewart/Eve Arden movie, "Anatomy of a Murder". Emil also made spending money during the fall/winter by trapping beaver, muskrat and weasel - ermine. Emil taught his grandson, David Olsen, how to trap, skin, stretch and dry pelts. Emil also made wreaths to sell for $5 apiece during the winter. I missed all of them, grandpa, grandma, my dad, uncles Don, Dick, Eric and Aunt Betty."

Today feels to me like a final goodbye to my grandparents, Edna and Emil Olsen, our aunts and uncles.  But I'm so thankful to have lived these two months with grandma's voice each morning through her diary ... from the winter of 1938, in the cabin, in the woods, in Marquette.  I can still hear her ....) 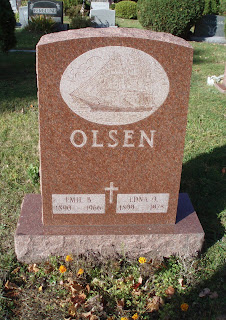