Diary of my grandmother, Edna O. Olsen, continues from January 1, 1938 - spent the winter in a cabin in the woods near Marquette during a very difficult winter season. Challenges, triumphs, and attitude!

"Another un-ambitious day. Miss McCormick out today & we gossiped & gossiped. Even Jacqueline the cat enjoyed her visit. A letter from Alice - wrote one in return - while the writing mood was on me. Cold as blazes out, haven’t even got what it takes to go out and get the clothes in. I did manage to get the house tidy, cake baked & frosted & so to bed for a beautiful nap, but broke it short when my caller came."

(me - do you hang clothes out in the winter? We use to and remember how hard the clothes were when brought into the house. Much of their clothes had to be hand-washed on top of hanging out in those freezing winters. I'm not sure when the wringer washers were on the market, but do remember one in our basement where my mother got her arm caught and pinched, more than once. It use to grab at the loose skin under your arm - ow. We have it so easy now. Picture of Betty Olsen (Turrell), her brother, Richard "Dicky" Olsen, and mother, Edna Olsen, taken shortly after 1938.) 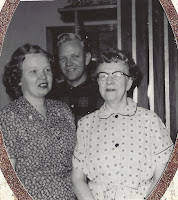 "The big boss was cranky this morning - big boss indeed! Sometimes he’s just a pain in the neck to me!! Sent the battery in to be re-charged. Hope we can get good reception on the radio when we get it back. Rusty was naughty in school yesterday. Teacher asked the pupils to make up interrogative sentences. Rusty was first with “who were you out with last night?” Pupils howled & teacher giggled & blushed. Dicky proud as punch over Rusty. Boy - that old teacher can’t get ahead of Russell."

(me - ice fishing shanty with my mother, Alfreda, and her sister-in-law Betty Olsen, with Eric Olsen on the inside.)

"Alphonse down today. Into town with him - all sorts of excitement. Met old man on road, took him in, he deeded place over to young Alphonse. Bozo followed then rushed back and stole meat-gun, etc. We met him coming home & so began a merry chase! Couldn’t catch up. Don went in with Alphonse 3rd time & called daddy not to come home. Snowed in. Children had to plow a mile home from school bus thru deep snow drifts. Result, Dicky sick with sore throat."

(me - Donald holding a stringer of fish, with sister, Janice; Eric in background with Edna Olsen by camp, about 1947.) 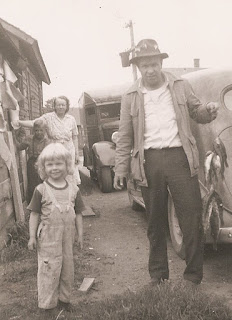 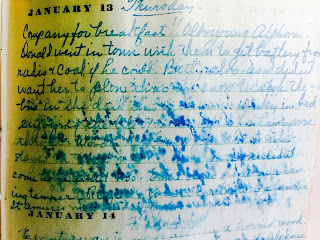 Thursday, January 13, 1938 (writing on this page is smeared so this is the best I can do. The … indicate cannot read wording)

"Company for breakfast!! Old & young Alphonse. Donald went in town with them to get battery from radio & coal if he could. Betty also, as I didn’t want her to plow thru the snow to catch the bus in the dark this morning. Dicky in bed enjoying the life of a … – he has a sore throat. Wonder how Emil fared last nite. Stayed in town. Don didn’t come home until 4:30. Emil came home in a raving temper. Russell and to … think he’s a lunatic. It amuses me … and is ..." 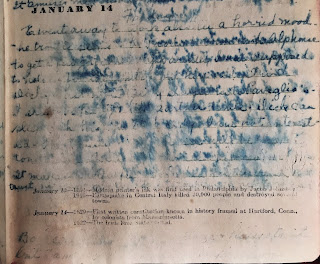 Friday, January 14, 1938 (writing on this page is smeared so this is the best I can do to read the book. The … indicate cannot read wording. Bear with the diary, there are only a couple really bad smudge entries, most are perfectly legible)

"E. (Emil) went away to work also in a horrid mood. The trouble seems to be from working in the … Alphonse to get a few groceries after ... Actually wasn’t supposed to help … here … get with Dicky … at Paveglio’s at ... Another thing.  Dicky can sleep with his … today … not interested … will be … tonite … It must … trust him. Bo … and kisses tonite but … impression."

"Up late this morning. Betty & I cleaned the house (!) as best we could & I washed out some clothes. Emma & Billie came over in the evening. Didn’t get good reception on this thing we call a radio. Me bored to death with living in general. If we don’t go to Detroit this summer, I shall. For too continued hibernating out here in the sticks will drive one batty."

(me - picture of Emil Olsen's mother, Laura Olsen, in Tonsberg, Norway. She looks formidable and family history is that she would answer the door during WWII when the German's would come calling. She must have scared them with her bearing, and packed a Luger under her gown - was never bothered by the soldiers. The family sympathized with the Jews, did something with the underground movement.) 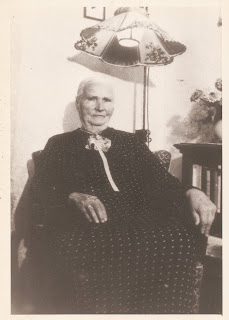 "Had 2 chickens for dinner today - dinner for once on time. Had a set-to with the boss again. Seems his partners out at the furnace are talking about me.  That is quite childish for others when I am being discussed. Feel horrid - if it weren’t for Dicky and Russel this weekend would find me high tailing it away from here. Nice way to feel for a mother - but I am not needed here apparently. Bad influence on the children."

(me – be reminded that grandma and grandpa were living in a cabin, in winter, with grandpa having to get to and from work in inclement weather – all this month with $17.72 until January 20th. The tensions are evident, but understandable. The women in the Upper Peninsula, also fish. My mother, Alfreda Olsen, holding her catch - and in a dress.)

"Another day to get thru. Sending 11.00 to Wards today. Slept rotten last nite - keep brooding over the dirty thoughts & insinuations I get from the big boss. One more year no doubt at the rate he’s threatening & voicing his thoughts and on the rocks for us!  Too bad but his actions toward me have caused me to have lost every last shred of feelings toward him. Can’t define it but it’s gone – with the wind."

(me - cabin fever? I think so and do have empathy for my grandmother in particular living in harsh conditions in this cabin. Picture is of our great Uncle Thorvald Olsen, brother of Emil, sitting beside King Olaf in Norway. They were friends, too. I had wanted to write to King Olaf for years and finally did in the early 1980s. I received a letter back from his secretary, a man, who said, in broken English, that King Olaf enjoyed my letter and then died shortly after - a keepsake for sure - and a reminder to not put off the important when it concerns people.) 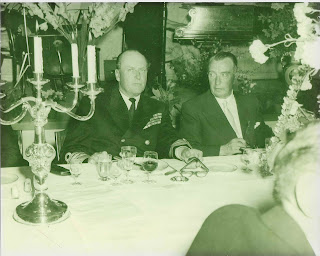 "Had a good day today for a change. Washed all my curtains and different washings.  Ironed up all my old ironing - darned socks - in general feel real ambitious.  Weather has cleared some – that is on the house! Got a letter from Margaret - makes me lonesome for Detroit. Dicky beat me 3 games of checkers. The rat!"

(me - winter snow. Watch for more entries as the U.P. will be hit by one of the worst blizzards in recent history, while they are living in the cabin. Sounds like grandma Edna is feeling some more control in her life.) 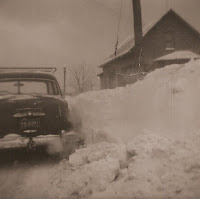 "Finished ironing my curtains today. Had Donald ask Alphonse for 2 chickens in payment for a days work he gave him last fall bailing hay - so had chicken for supper - also cherry pie. It was good. Also beat the boss 2 games of checkers. Don’t feel quite so ugly toward him - but - he does get my goat. Alphonse brought a half load of wood home that Don cut."

(me - my father, Donald Conrad Olsen, was the oldest of the children in the cabin and a lot fell on him to do, but, he was a hard worker all his life. As a young man he had a heart attack, open heart surgery, then a stroke, and lost his job due to his health. He picked himself up, started a business, Olsen and Sons Trucking. He had seven kids and a wife to support so had work, but also was in his nature to keep on keeping on. I think this picture looks so much like John F. Kennedy ... love it. What do you do when you live along Lake Superior? Perhaps walk the shores.) 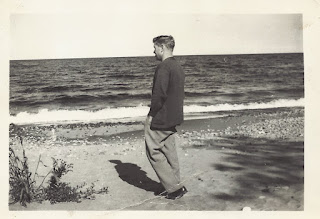 "Got thru my work early today so got in a mess of darning today. Also cleaned my machine drawers! I am going to take a nap now - first feed the pigs. Don has gone in to town with Alphonse. Pay day today. Can’t get a darn thing on the radio but WBEO & not that good. This is miserable ink - when I have a dime to spare I shall get some that stays blotted when it’s blotted!" 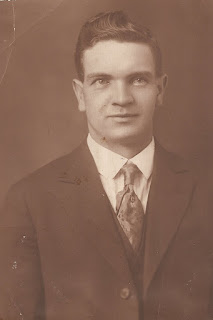 (me - my grandfather, Emil Berger Olsen, around 1914/15 - either school picture before he left Norway or picture from America. Story is that he got in trouble at school. He went down to the docks and signed on a ship as cabin boy. Due to his height was not questioned about his age and never returned to Norway, settling in America, in Michigan. Emil was afraid of his father's wrath and punishment. If you saw the movie "Thor" the first few minutes is about Tonsberg. The blizzard is days away in the U.P.)

"Had a large day today. Did quite a large wash - baked 5 loaves of bread - made a big kettle of Mulligan - don’t like the job of peeling vegetables! and scrubbed the whole house. Missed my nap & was simply all in but the shoe strings - so directly after supper lay down & slept til 8 o’clock. Plan to take the car tomorrow - father’s day off & take Don in to the clinic, buy some grub & gad!" 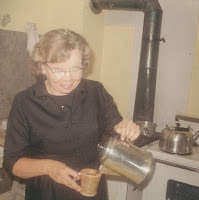 (me - the kitchen at 616 Baraga Avenue, Marquette. Betty Olsen Turrell, who was living in the cabin with her parents in 1938, pours a cup of coffee, as, first we have coffee ... It must have been difficult for a young girl living in the woods, going to school and having to wear dresses and petticoats. I believe we were able to wear long pants by the 1970s. I'm amazed what our elders endured with spirit and the complaints from people now if they have to walk a block to their destination.)

"Did I say I was going to take the car & Don! Oh yeah - Father bright & early got ready & announced he was taking me to town.  I never was so disgusted in my life. I waited til we were halfway to town & my wrath bubbled over. Well anyway I got it out of my system. Had lunch in Billie’s & the air is a little clearer now, but have I had one peach of a headache since noon. Next weekday pop is off, Don & I are off for the day – regardless. That’s a promise and I don’t mean maybe."

(me - the family lived for a time in Big Bay, a beautiful town 25 miles above Marquette, with gorgeous views of Lake Superior. Eric and Janice Olsen stand by the car in 1947, winter and no coats. Neither were in the cabin in 1938 as they were born later. Janice went on to marry Frank Summersett and Eric married Nina Hawkins. Eric died on the Ides of March 2015.)

"Nice day today. Betty & I cleaned the house up. I set bread & put some underwear on the stove to wash (that is in the tub!) Darn good thing I set bread early as the Paveglio’s came out & we had an hectic time. Father home at 6 & we had a pleasant evening - listened to the dandiest program with Tyrone Power & Anita Loos - & so to bed."

(me - storm in the northeast. It doesn't seem like Emil and Edna are aware of this, maybe because of radio problems. This is a picture of Russell and Richard Olsen with brother, Eric in the middle. Russell and Richard lived at the cabin with sister and brother, Betty and Donald, and their parents. Eric was born later.) 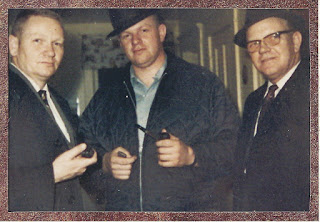