Occasionally, a treasure is discovered unexpectedly and brings a delighted exclamation from our hearts. This was the case after my father died in 1980 - in his "cedar chest" was a small burgundy-brown hard covered diary from my paternal grandmother.

Edna Olivia (Anderson) Olsen wrote in this book from January 1 through February 25, 1938 - portions of it through "the great blizzard" which tore through the north part of the country, hitting the upper peninsula hard and fast. Grandma lived in a small cabin in Chocolay Township, Marquette, Michigan, with her family: husband, Emil Berger Olsen, children Russel (Russell or Rusty), Richard "Dicky", Donald - my father - and Betty.

These entries encapsulate how my family survived the difficult winter of 1938, struggling at times, yet written with my grandmother's humor, in the midst of food shortages, worry and "cabin fever". I will add her daily entries into this blog as the days progress through the end of her diary.

The year begins with this poem written by my grandmother.

1938
The old year’s gone and now it’s dead
We’ve got a chance to look ahead.
A new year stretches out before,
It’s full of opportunities galore.

In days gone by we made mistakes,
We didn’t have quite all it takes,
To do the things that we laid out,
But now we’re feeling fresh and stout.

The new year’s like a brand new book,
And though we cannot take a look,
At unturned pages, as we start.
We know that if we do our part
The new year will be good to us
And leave us fat and prosperous.

On new year’s day some folks swear off
And all their old bad habits doff.
Ere a month past us has skid
You’ll find them folks has all back slid.

Some won’t promise anything
But as I look ahead, by jing.
I’ve got a hunch that maybe fate
Will be right good in thirty-eight,
With snow and rain in season so
The seed we plant will sprout and grow.

Let’s take things as they come and do
Our tasks, each day, not fuss and stew.
Because the fast descending sun
May catch us with a job half done.

We’ll get our work all done some way
And after we have hit the hay,
Let’s rest and just be satisfied
To know that we have toiled and tried!

"Snowed in today - biggest blizzard of the season.  Wrote to Pohls, Smiths, Kerriotts & Odbjorg Olsen. Had 3 chickens for dinner - ate too much - so spent the rest of the day trying to sleep it off.  Beat Emil at a game of checkers - some start of a new year.  Also checked up on our finances. $29.00 cash on hand. Liabilities $203.22.  Hope we can be free of debt by Spring."

"Hung out my wash today - it's been standing since the 30th of Dec. waiting on the weather to abate. Poor Rusty had the job of shoveling thru a 3 ft. drift so I could hang them. He did a neat job too begorrah! Got to press Betty's red skirt and silk petticoat for school tomorrow.  Also darn a pair of hose for Dick & Russel - darn it all anyway!  Couldn't get my gasoline iron working so Betty is out of luck, has to wear a soiled dress to school.  Such is life out in the sticks!"

(me - a picture of deer camp in Deerton, Michigan - sitting on the front stoop with my father, Donald, is his daughter, Laura, and son, Stephen.) 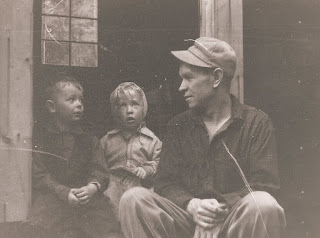 "Had a splendid start today!! Betty, mad because of her old dress - near froze walking to get her bus - 7 o’clock - missed it, had to walk back. Emil couldn’t get his car started so had to get Alphonse to tow him. Here it is nine o’clock and me jittery as a wet hen! Don went in town with Alphonse, got my groceries, and had a haircut, fainted in barber’s chair - worries me.  And the barber Braxton went berserk. Alphonse fixed my iron. Betty got her new dress “Gone with the Wind”. We are all dippy over it."

(me - with plenty of liberty I include this picture of two delightful outhouses at one of the family camps. They were rather raw but worked perfectly with no plumbing issues, but an occasional skunk visitor.) 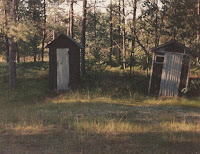 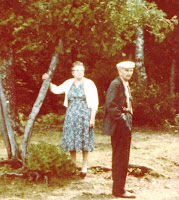 "No car trouble this morning! Me I feel as ambitious as a dissipated dish rag. So I’m going to wash out daddy’s working clothes and about a million hdkf’s (handkerchiefs) as punishment. Got to bake bread too and how I can manage to put that off!! Also iron a few pieces. Father inclined to be cross when he came home tonight - no reason - so mother starts walking kind of stiff legged expecting a good tiff but F (father) backed off. And so to bed friends once more. Beat Russel 2 games of checkers."

(me - picture of Edna and Emil Olsen from a family camp in Marquette.)

"Ironed just 50 hdkf’s last night. Iron works good but leaks a little gas. Car wouldn’t start this morning so Big Joe gave F (father) a tow. Timer out of whack again. Going to finish my ironing today if my ambition holds out! Hope F. gets to work on time. He rang in just as the whistle blew! Made 13 mi. in less than 1/2 hr. Was to bring me hamburger tonight for my spaghetti. We waited until 8:30 then ate without him. He took his car to a garage. Cost him 50 cents to get timer adjusted. Also wrote to Walborg today."

(me - Emil Olsen (grandfather) in background with Jimmy Stewart and Eve Arden in "Anatomy of a Murder". Through family recollections, Jimmy would wander around Marquette and stayed in a place down the street from Emil and Edna (who was also in this movie) and was an all around nice guy. Russell and Betty Olsen purchased the car Stewart drove in the movie. Emil was also a stand-in for Stewart being the same build.) 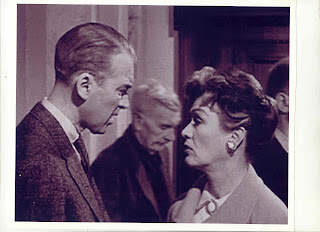 "Today I’m alone. Don up to Readers to cut wood. Hope I feel more ambitious than I did yesterday. It’s going to be fun though - not more than 6 armfuls of wood in the shed! Emil’s pay yesterday was only $17.72 - going to be some fun to stretch that over til the 20th! Got a “B” battery yesterday and we tried to get Alphonse’s old battery radio to work but “no soup”. Emil was cranky last nite but when yours truly got up on her high horse he tuned down a bit! Irene Tonsignant over today for a 2 hour visit."

(me - what do you do when you live by Lake Superior and other local water sources? Fish and do more fishing. This is a picture of Emil Olsen with my father, Donald, who was 17 when they lived in the cabin during the writing of the diary.) 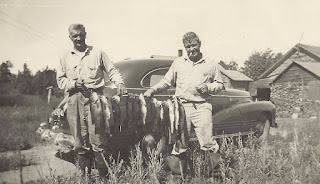 "Dirty weather today. Don meandered up to Reader’s after chores, didn’t realize it was so stormy or I wouldn’t have let him go. Alphonse came over, got stuck by Sevimers (sp), wanted Don to help him. I gave him some coffee, bread, jam then when he went - went to town with him. Got tubes for the radio - hope it works! Storm was terrible. Emil came home, had supper and went again to stay in town over nite so he wouldn’t miss work in case the snow plows didn’t come thru."

(me - Russell Olsen sitting on the porch of a cabin at camp. I am often amazed that after this difficult winter of 1938 the Olsen family still loved their camps and everything about the wilderness of the U.P. He was 14 during his time at the cabin.) 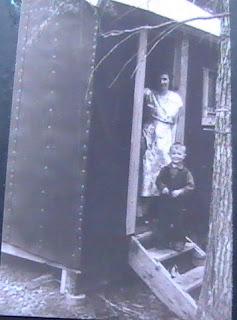 "Saturday - nobody ambitious - killed 2 chickens for Sunday dinner. Emil home at 8 o’clock, we’d given up expecting him home. Had a terrible trip yesterday, one flat after the other on the way in Fri. nite. Then parked on Main St., got a room - 504 - & didn’t sleep. Traffic ticket for parking in the morning. Had to get time off from work to square that - no charge. Then trouble all the way home. Bought $1.10 worth of coal. Does it ever feel good!"

(me - Alfreda and Stephen Olsen, obviously a newer than 1938 picture, peeking from a cabin door at deer camp in Deerton, Michigan. Tar paper walls, cheap, and not the doorways of today, but hardy and probably bear proof.)

"Got Father’s breakfast this morning! Car froze up so he had to unfreeze it! 2 new tires came yesterday so let us hope our tire trouble is over! Didn’t feel equal to putting them so took them along in case! Got to defeather my chickens this morning. Am going to wash out a few things today as I have coal & can have a fire with no stinting. Sun. Eve. The chicken was swell! & so to bed."

(me - some ask how people take their baths in the woods with few cabins with shower facilities. Our experience is that the younger ones get put in these tubs on the kitchen floor, and, that a drape can be drawn in the sink area so older ones can wash up in relative privacy.) 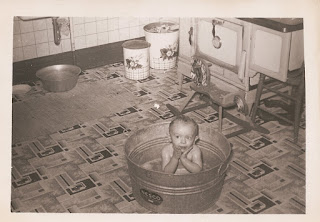